With Christmas and New Years Eve just around the corner, NBA fans are more focused on it being the NBA Opening Night Eve after the league’s shortest off season due to the Covid-19 pandemic scare. Two games headline the start of the campaign, starting off with the Golden State Warriors visiting the Nets out in Brooklyn, followed by the first of four games between the Los Angeles Clippers and Lakers, as the Lakers will receive their championship rings as they kick-off their championship defense campaign. Here’s my takes on both games.

A spectacular summer in Brooklyn led to the additions of Kyrie Irving, Kevin Durant and DeAndre Jordan. Of that trio, only Jordan has appeared in a game for the Nets, while the Warriors are recovering from injury problems themselves with the return of Stephen Curry, albeit, they will be lacking the services of Draymond Green and Klay Thompson, the latter of which will be missing the remainder of the campaign due to an unfortunate incident over the break.

Along with the debuting of Irving and Durant for the would-be hosts, the Warriors are excited to see what James Wiseman, the teams second overall pick during the draft, is able to do on the floor in the highest level of the game. With the absence of Green, Wiseman is expected to start and get heavy minutes at the five man slot, poised to make a good partner for Curry in various schemes as orchestrated by Coach Steve Kerr.

Due to the injury concerns, the Brooklyn Nets have to be clear favorites to take the game, as reflected by being 7.5 point favorites, however, Curry is one of the leagues most gifted scorers, and no one knows the level of rust that Irving, Durant and even Curry will have. With that said, I still believe the Brooklyn Nets will cover 7.5 while also being confident in the over 231.5 line as neither side is quite known for their defensive prowess.

As far as Daily Fantasy Sports go, I feel confident picking Durant to be my team’s captain being flanked by Curry, Wiseman, Joe Harris, Eric Paschall and Irving.

What should have been an epic Western Conference Finals match-up in the Orlando bubble, before the designated visiting Clippers blew a 3-1 lead to the Denver Nuggets, the two Los Angeles sides will kick off their second consecutive season against one another. If you want to consider the first game of the bubble reset as an opening game, then it’s the third straight opening match to feature the Staples Center foes.

Both teams fine tuned their units, with the Clippers revamping their coaching staff and the defending champions retooling their rotation around the dynamic duo of LeBron James and Anthony Davis. Plenty of story lines make this a highly anticipated game, despite both fan bases claiming that it’s only the first game of a long marathon, as the Lakers will receive their championship rings whilst unveiling the franchises 17th banner. To boot, Montrezl Harrell, who had spent the last few seasons with the Clippers, including winning the league’s Sixth Man of the Year award switched locker rooms along with The Atlantic’s analyst Jovan Buvha also switching to being the Laker beat writer and not the Clipper.

Injury report is relatively thin, as the Lakers haven’t listed anyone and the Clippers will be without the services of Marcus Morris, the anticipated starting power forward for the season and Jay Scrubb, a second round pick who was signed to a two-way contract. The absence of Morris is a major blow for the “visitors,” which will, most likely, lead to Nicolas Batum getting the start, as he did during the three-game condensed preseason.

A game that is real tough to call, I feel as if the Clipper players, namely Paul George, will come out with a chip on their shoulders, as they look to prove off the bat that the team is poised to make a deep run in the playoffs, winning the game, thus, covering the +2 line. Also expecting the game to be a bit more scrappy than the one prior, and taking the under  of the 222. 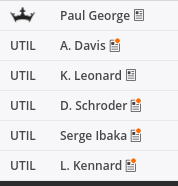 For Daily Fantasy Sports, I like going with George as my captain, flanked with Leonard, Davis, Dennis Schroeder, Serge Ibaka and Luke Kennard.