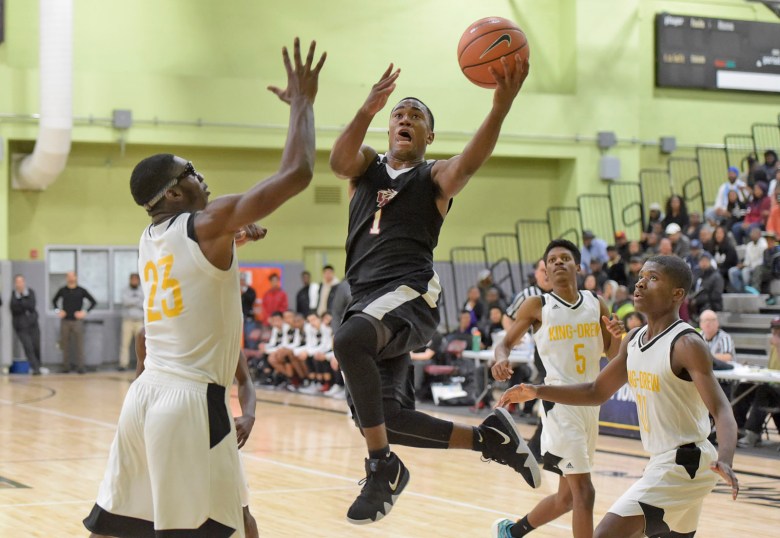 Tyree Winborn has, at least, one more prep game left in him.  (Photo by Dan Watson / SCNG)

March Madness is officially here, as Los Angeles City Section teams are getting ready to face off in the state tournament on March 7th. Brackets were released on Sunday, with four teams making the Division V tournament, only one of which gets to host the first round.

The battle of the Wolves takes place in Van Nuys, as both sides look to make a section championship loss a distant memory. Wiseburn-Da Vinci dropped a ten point decision to Duarte (2nd seed in Div V), and a victory could set them up for a possible rematch with the Falcons. While Van Nuys lost at the buzzer to King/Drew (15th seed in Div IV) and were on the edge waiting for Sunday’s brackets to be released.

Prediction: I like a rejuvenated Van Nuys here to move onto the second round, erasing not only the City Section loss, but last year’s one-and-done in state, by a margin of 63-48.

Winning the Los Angeles City Div III title wasn’t enough to give the Jaguars a home game, as they will make the trek up the Cali-14 to face the Ravens, who won the Central Div V title. Contrasting styles will be on display, as the Ravens average over 90 points a night, having reached triple digits on 11 occasions, including a 165 point performance against Frazier Mountain. On the flip side, the Jaguars have only given up over 60 on four occasions and will look to slow down Hubert Johnson and Cameron Jarmon.

Prediction: In the end, offensive firepower prevails as I like California City to walk out with a 76-58 victory.

Behind Dalin Takairangi, Canoga Park won the City Div IV title the San Diego Div IV champs, who boast a solid 9-1 home record. Takairangi, Jake Gomez and Alejandro Gomez will be heavily relied upon as they hope to make the Hunters first state playoff appearance isn’t a short one.

Prediction: Upset minded Canoga Park sticks around and finishes the job with a 61-57 victory.

It isn’t often where first round opponents have common opponents, but both the Jaguars and Dragons faced off against Nogales (La Puente) and both lost by double digits. For Foothill Tech, that loss came during the Southern Section Div 5AA championship game, as the Jaguars won the City Div V title over Sun Valley Magnet.