With the Division II playoffs under way in the Los Angeles City Section, the Van Nuys Wolves showed grit en route to a 68-55 home victory over the Lincoln Tigers.

Senior Tyree Winborn got the game started right off the tip for the hosts, taking the ball in for an early lay-up, pleasing the packed stadium. Lincoln did’t waver, scoring 11 of the next 13 points behind two threes from Jason Huang with Sebastian Mejia chipping in with one of his own.

Coach Evan Porter made the proper adjustments as the Wolves answered back behind a Matthew Sykes drive and a Winborn jumper. The three ball would continue on for the Tigers, as Huang drained his third of the quarter while Ethan Quiambao kept the Wolves within striking distance with a pair of buckets. Tally after one had the Wolves trailing 17-12.

Sykes got the second period underway with an easy bucket before Winborn and Huang traded haymakers to the delight of the crowd. Winborn hit a three, Huang answered. Winborn attacked and got the lay-up and Mejia got the two back at the line.

Winborn went right back and drained another three to tie it up, and, as expected, Huang answered with his fifth of the game. Determined to answer back, Winborn drained yet another, which was answered by a duece.

Down by two, the senior absolutely took over draining a three, getting to the bucket to complete the old school three point play, hitting a jumper and two additional freethrows with Huang’s SIXTH long range bomb sandwiched in between.

Going into the half, the Wolves took a 35-30 lead. Winborn chipped in with 27, 21 of which game in the second quarter while Sykes and Quimaboa and Sykes had four a piece for the hosts. Huang led the visitors with 18, six from range as Mejia chipped in with five himself.

Lincoln scored with ease to start the second half behind a Mejia lay-in, and then the Wolves defense stepped up, behind a pair of threes from Josh Updegraph and Mijuhaim Ali, while Quiambao and Winborn chipped in a bucket each, giving the Wolves a 45-32 lead.

The ever-so resilient Tigers weathered the storm without the need of a time-out as #22 (not listed on Maxpreps) got his third duece of the game, Jesus Navarro chipped in with a pair and Arturo Villaneda got on the board.

After six threes in the first half, Coach Porter made a great adjustment to throwing the length of Quiambao on Huang, holding him to a hard earned three in the third, his lone bucket.

The Wolves 13-point lead vanished, as they walked into the fourth with a slim, 47-43 lead. Lincoln had an opportunity to further cut into the lead with the final possession, until Sykes used his length to net one of his six blocks.

Behind a loud home-crowd, the Wolves came out firing in the fourth as Sykes and Winborn got to the line, and Ali hit a bucket, extending the lead to 52-43.

As Ralph Lawler would say, Jason Huang drained his eight from distance, working for separating from Quiambao. Winborn got right back to the line, splitting the pair and #34 (not listed on Maxpreps) got a duece, cutting the lead right back to 53-48.

Deja vu hit, as Winborn netted back to back buckets, giving the Wolves some separation. Huang got around Quiambao, drove to the bucket and had a wide open lay-in, until Sykes pulled a Marcus Camby with a weak side block.

Lincoln then went into a full-court press, but made a fatal mistake as Winborn throw a Brett Favre-esque pass, hitting Ali for a lay-up without a soul in the vicinity, giving Van Nuys a 65-54 lead with time on their side.

A foul by Updegraph put the visitors to the line, as Anthony Hernandez split the pair and a ten point deficit remaining with under a minute left. With the home crowd on its feed, the Wolves fed Ali for the final shot from range, which hit the bottom of the net. 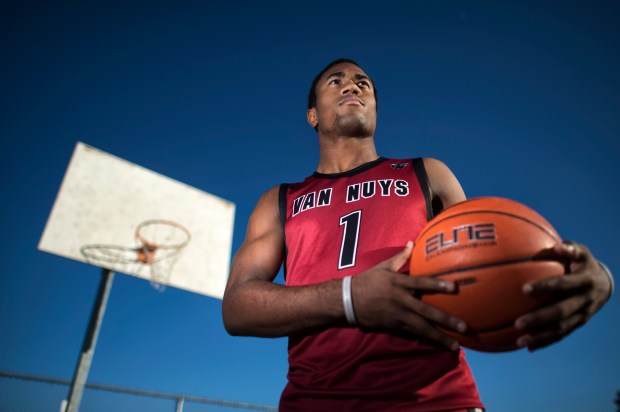 Winborn finished the game with 35 points, 21 of which came in the second period and six boards. Sykes had six points matching his six blocks while Ali scored 13 of 16 in the fourth period. Quiambao finished with eight and spectacular defense on Huang while Updegraph drained a three.

Huang led the visitors with 28 with eight threes, while #34 had eight. Meija had seven while sophomore De Los Santos had four, along with Navarro and Villaneda. Hernandez had a single tally.

My prediction had this 61-47 for the hosts, not very far off.

Up next for Van Nuys is a home game   6th seeded-Los Angeles, who won 58-51, MaxPreps’ initial scoring was incorrect.

4th seeded Chatsworth took care of Animo South Los Angeles 80-58 (63-48 was my call) and will face the winner of Vaughn/Hollywood (waiting on the results, prediction had Hollywood 65-43).