Hopes for qualifying to the 2018 World Cup were dashed with an abysmal start to the campaign, but the Armenian National Team looks to bounce back with its second consecutive victory as they will host Kazakhstan on March 26th, just the second match under new manager, Artur Petrosyan. A battle of fifth versus sixth place is one which the home side will need to capitalize on and hope it provides some much needed momentum to make the race for a top two finish plausible.

How Armenia Got Here:

Without a permanent coach to start the campaign, Armenia started the campaign with uncertainty, and it certainly showed on the pitch. To kick things off in Copenhagen, it was clear the mentality was to try to escape with a draw, as the Danes dominated possession and 20 shots (9 on target) to the visitors lone shot being on target, just mere inches away from helping them reach their goal. Denmark also had a shot go off the woodwork and a spot-kick saved while effectively nuetralizing any chance of Henrikh Mkhitaryan having an impact with man defense.

Following the effort in Copenhagen, Armenia headed home to face off against Romania, which wasn’t much of a match as the visitors scored three times within the first 12 minutes en route to a 5-nil drubbing, a match right before a trip to Poland on the horizon. For the second time in the campaign, Armenia went in with a defensive mindset, at one point having 10 players in their own third of the field. An own goal got Poland on the board in the 48th minute, which didn’t hold as Marcos Pizzelli equalized for the Armenians in the 50th. In the 94th minute, Aras Ozibiliz had the opportunity to give Armenia the winner, but botched a 1v1 opportunity, which Poland quickly went down the other way, drew a free kick and scored the winner. A dagger in the Armenian hearts as they nearly took all three points without Mkhitaryan.

Going back home, Armenia was set to face off against a surging Montengro side, who were sitting in the top slot with victories over Denmark and Kazakhstan, while drawing with the Romanians. Montenegro went up 1-0 in the 36th minute, doubling the lead just a mere two minutes later, taking the air out of the home sides sails. Clawing back, the prideful Armenians got one back in the 50th and equalized in the 74th. Well, this time, it was Armenia who scored in stoppage time as Gevorg Ghazaryan (also known as GGLegend), scored the winner from outside the box, securing the first three points of the campaign. GG’s last goal for his national team was also a game winner, to secure three points in stoppage time, against the Czech Republic during the Euro 2016 campaign.

How Kazakhstan Got Here:

A home date against Poland kicked off the cycle for Kazakhstan, and a brace from Sergei Khiznichenko aided them to drawing a point against the group favorites. A trip to Montenegro wasn’t fruitful, as they were drubbed 5-nil before returning home and holding Romania to a scoreless draw, securing their second point in the campaign. A trip to Copenhagen was similar to the visit in Montengro, as the Danes ran out with a 4-1 victory. 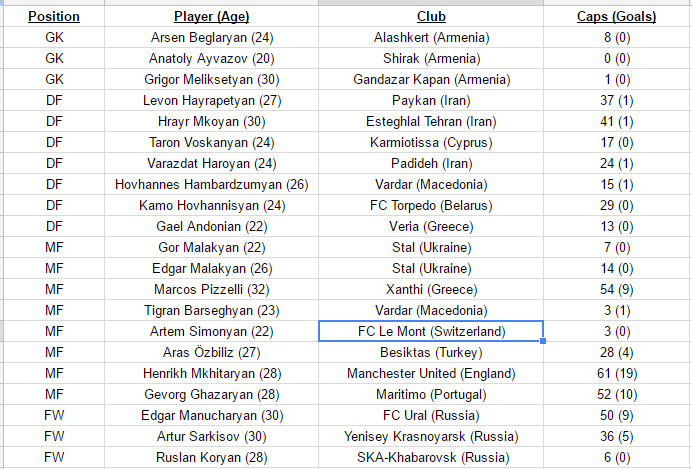 All-Time Record:
Armenia has won three of the five meetings, with one draw and one Kazakhstan victory, with nine scored by the Armenians and five by the Kazakhstans. Last meeting was a 2012 friendly, which Armenia won 3-0 behind a Mkhitaryan brace and Movsisyan finish.

Prediction:
Backs against the wall, I expect the Armenians to take this one by a two goal margin. The keeper and backline is still shaky, but the midfield should be able to chip in and keep possession away from their own third. Still irate that Yura Movsisyan isn’t being invited back onto the national team.